In the Castella district on pre-Christian docks lies Varoulko.  This restaurant was founded by Chef Lefteris Lazarou.  He cooked in ship galleys from the age of 15 and was recently awarded a Michelin star.  Chef is famous for focusing on authentic Greek seafood and wine.  This can be disappointing to people used to getting any fish they want.  But which is more impressive, getting a Michelin star with all the fish in the sea, or with only a few fresh Mullet and a Grouper?

The restaurant is stunning with floor to ceiling windows.  The dock rests only a few feet beyond the glass.  There is no roof, just a white canvas sail with bends that make it look like a a log cabin wall.

A five course tasting menu with ½ glasses of wine is served.  It starts with a beautiful Greek rose and a lightly fragrant shrimp consommé. This is accompanied by Night Ranger’s song “These Broken Wings.”  Dish after dish follows.  A noodle swims around my mouth like a naughty tongue.  Boats outside drift to the left, creating the illusion that we’re floating away. A giant whiskey flask of olive oil sits on my table.  Next to the golden bottle a sign says, “Purchase from Varoulko Seafood at a Special Price.” 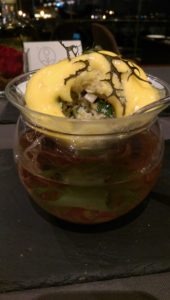 The only odd moment during the evening is when I ask for a bathroom.  The waiter leads me outside to the street.  I look at the pavement, puzzled.  We both look at each other.  An awkward moment ensues.  My steward then explains that across the street is their other restaurant.  The bathrooms are one floor down.  A public urination incident is narrowly averted.

The rest of the meal is delicious.  It is followed by a quiet ride to the hotel and passing out.

A Pantheon of Food

Saturday is the start of the Athens Food Expo.  Like other salons, it is in a large building with multiple halls, and a menagerie of booths.  Each table is a living documentary of a Greek family.  Most Hellenic businesses today are passed down across generations. 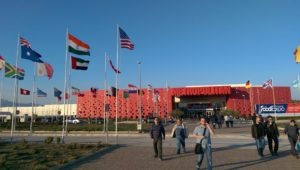 This is the only trade show (not open to the public) where I’ve seen large numbers of children running around.  Greek mothers don’t scold so much as aggressively hope.  And kids might look divine, but they are not untouchable.  One doll-sized Greek boy, sprinting, head-butts my kneecap.  Moving on, I spend as much time avoiding infanticide as I do looking at Aegean wares

At last year’s show, I averaged 20 meetings a day, tasting and negotiating pricing on Greek cheeses like barrel aged feta, Cyprian halloumi, sheep and goat’s milk kefalotyri, etc.  This year my focus is on extra virgin olive oils, vinegars and other shelf stable foods.  My first appointment is with a Greek olive oil company.  Their rep is a young man with shockingly black hair in a suit.  He struggles in English to explain what is special about his monovarietal blend of Koreneiki.  As I listen, a half smoked joint hangs precariously off the edge of the table.  Like in Spain, people roll their own cigarettes here.

Olive groves all over Greece grow mostly Koroneiki.  Here it is synonymous with the identity of olive oil. Many labels don’t even distinguish whether they’re mono-varietals or blends.  The acidity of these crushed stone fruits ranges from a 0.2 to 0.5 pH. By picking some of the olive harvest earlier and some later, you can manipulate the bite of the oil. Koroneiki tastes a bit like a Spanish Picual.  But the fire with better oils can take a bit longer to build in the back of your throat.