One meeting of note is with the Papadopoules family.  The son, a second-generation apiculturist (beekeeper), works the booth with his fiancée.  She is a designer who also rides shotgun on his island truck of bees.

It turns out that these drones are very savvy about their neighbors.  Honeys have unique flavors depending on the diet of these hairy insects.  Flowers blooming at separate times yield different tastes.  But what about pine tree honey?

So, there is a species of insect, Marchalina Hellenica, which feeds on the sap of pines.  Their fangs pierce the skin of the tree like a vampire.  Marchalina’s feces is called honeydew (the prettiest name for shit I’ve ever heard).  While bees prefer floral nectar, when the flower harvest is lean they’ll collect honeydew.  Some experts don’t consider this to be pure honey.  But it is delicious!  If Hellenica excrement is good enough for the bees, it’s good enough for me. 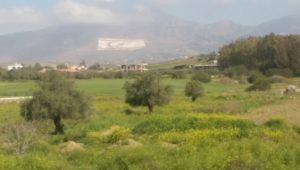 Monday morning and I’m back at the Athens Airport.  It has an impossible to pronounce name that sounds like “Lefty Venezuela.”  I travel so much that now even on a domestic flight, I’m going through immigration passport control.

My plane is going to Lanarca on the southern “Greek” island of Cyprus.  I use air quotes around “Greek” because this volcanic fossil is the Cuba of Europe. And I am heading towards its Guantanamo Bay.

If you look, the coastline of the Eastern Mediterranean is dotted with lots of islands.  A millennium ago the Greek people were titans in the industries of sailing and baby making. Today islands that are swimmable from Turkey are all Greek with one exception – the Republic of Cyprus. Cyprus is at the center of a lopsided orbit of Arab fun.  The mainland curves around the island.  So, to the South you have the Israeli / Palestine conflict, to the East Syria and Iraq, and to the North Turkey (whose recent spate of terrorist bombing and religious extremism isn’t reassuring).  And to the very, very, very far away West you have Greece.  The compass rose on this map has lots of thorns.

Cyprus has a long and complicated history.  In 1974 Turkish troops invaded the island in response to an attempted coup by Greek nationalists.  The result?  A separate Turkish state exists today in the northern part of Cyprus.  A United Nations demilitarized zone separates the Turkish Cypriot’s top one-third from the Greek Orthodox’s bottom two-thirds. But here is where things get both a little weird and a little cool.

Cyprus has a long and complicated history.  In 1974 Turkish troops invaded the island in response to an attempted coup by Greek nationalists.  The result?  A separate Turkish state exists today in the northern part of Cyprus.

The capital for the entire island is Nicosia (on the Turkish side). And the European P.D.O. system for certifying traditional E.U. foods (tentatively) recognizes Halloumi regardless of where on the island it is made.   But the E.U. membership for Greece is only for the Greek part of the island.  And U.N. brokered peace talks have stalled of late for this 50-year-old conflict.

I am waiting at Gate #9 for my flight to Cyprus.  In a weird twist of fate, all the people around me are Hispanic.  Very strange. I accidentally drop a bunch of papers and literally every Spanish passenger rushes to help me, unasked. Wow.  Back home people only rush like this is when the bar has last call.