“Dur” sign.  While Greek geometry deals with general spatial relationships, Cypriot warnings are more to the point.  Their stop sign both warns you to halt and treats you like an idiot if you don’t (Dur!!!).

In the distance, a giant mountain gets closer and closer. We pass a newly constructed white mosque, shooting straight up into the sky.  No one here is wearing a Hijab or Niqāb, the traditional covering for Muslim women.

Hassan pulls into the parking lot of the Gulgun Dairy.  It is just outside the capital city of Nicosia. Mr. Banu Polat and his export manager Ali greet me.  Banu and his brother inherited a fledgling cheese business from their father.  Fast forward to today, and they’ve just finished construction on their new plant.  The Polat family’s focus is the cheese that put Cyprus on the map – halloumi.

Our brief meeting ends by 6 pm.  Banu, Ali and myself hop into his Land Rover and head downtown.  I check into my hotel.  At the front desk are two liquid pumping stations.  The clear one says “Dezenfektan” and the yellow “Kolonya.”  Hand sanitizer and cologne available for free and in bulk quantities! 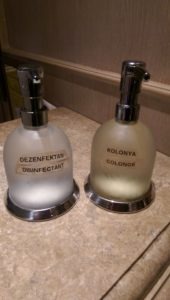 Getting back into Banu’s car, we head to Kyrenia.  This harbor city was founded 6,000 years ago after the Trojan war.  Ali grew up here and tells us stories about his uncle. He’d fish for octopus by sticking his hand in rocky crevices during low tide.  Octopi would attack his fist and into the basket they’d go.

We arrive at Niazi’s a beautiful restaurant with a chef dedicated to just grilling meat.

Interesting side note:  Want to see how much social media exposure you have?  Post a picture on Facebook and Twitter of the restaurant you’re at.  But have a palm tree cover part of the sign. So now, in giant blood red letters, it says NAZI’S.  If absolutely no one reacts, then you’ve the media presence of a 47-year-old crotchety food importer. 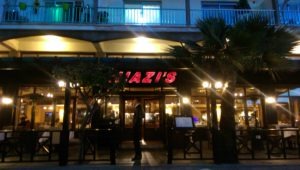 The god of grilling sits in full kitchen regalia underneath a giant silver chimney, white chef hat and all. The snap, crackle and pop of sizzling fat comes from metal waffles he uses to flip the charred flesh.  Smoke from the coals keeps him company.  I wonder if his wife is a vegetarian.

Everyone here knows Banu and Ali.  This is a small town.  And Ali is the childhood friend now living in the big city of Istanbul.  His wife is a professional cellist so we talk about music before drifting onto the topic of Cyprus.  Everyone here is less interested in politics and more interested in just getting on with their day to day lives.  Tourists from the Greek side come here all the time.  Gambling is illegal in the south, so the North has casinos everywhere.  Spending lots of money helps to ameliorate any political ill will.

We leave the restaurant and walk around the docks. Ali tell us more stories from his childhood.  We stroll by two men drinking and playing cards on an old commercial boat.  One looks Greek and one Turkish, but both are young, drunk and happy.

Cyprus is the living embodiment of modern day encryption algorithms. It is easy to take two prime numbers and multiply them together.  But take that product and divide it back into the two correct component parts.  With so many possible choices but only one set working, the opposite is far more difficult.  And turning the island of Cyprus into the right  two prime numbers means finding a very difficult combination of political sacrifices.