When the cheese floats on its own, it’s drained and bagged with salty brine.  Halloumi is known for it’s high burn point.  It is seared with burn marks (like the cross hatch on a ribeye steak) before serving.

Ali, Banu and I walk past giant, stainless vats feeding a kefalotyri production line.  This hard cheese tastes like a salty Swiss Gruyere.  Kefalotyri is also made from sheep and / or goat’s milk.  Someone on the production line reaches into the tank, pulling curd out.   He stretches it to the size of an off-white bedsheet. 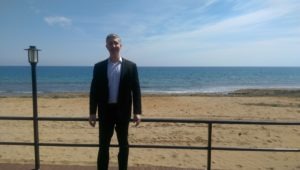 We wrap up the rest of our meeting, and Hassan meets me outside. He uses sign language to ask about my broken shades.  We drive down back streets heading to the border.  On our left behind a wall of sharp metal, soldiers train in the demilitarized zone.  Arriving at the U.N. checkpoint, the Turkish side has two blond women in uniform. They do all the paperwork.  A stocky, bald officer with a Turkish haircut just stares at us.  I wonder if glowering and military V-neck sweaters are in his job description?

Hassan seems to know everyone.  Even the stoic sentry might’ve inadvertently nodded to him.  We pass through, and upon entering Greece are immediately stopped at the E.U. checkpoint.  A Greek police officer with Top Gun shades is questioning a northern Cypriot.  When he came into Greece yesterday his car was fine. But upon trying to return to the North today, it is suddenly quite banged up.  If I understand Hassan, this gentleman’s replies are along the lines of “really?” and “you don’t say!” with the appropriate shrugs.

The officer (in excellent English) questions me about my brief visit.  A part of me wishes that I had something cool to hide.  But as soon as I explain that I’m here as a cheese buyer, his eyes glaze over in boredom.

Back in Greece, the flags still fly in pairs though less frequently.  Turkey is replaced with Greece.  After the spaciousness of the North, I’m struck by how much higher the population density is here.  The closest to an empty field we see is a playground.  At Lanarca airport, Hassan says goodbye doing the European kiss kiss hug hug thing.