Paris By Way Of Austria

Since it’s a long flight across the Atlantic, I often try to combine multiple visits on one trip.  This time on my way to Paris, I stop off in Austria for several days of meetings. The weather when I land in Vienna is cold, dark and rainy.  This city is like Seattle, but instead of Pearl Jam scalpers, you have Mozart scalpers.

Vienna has a population of 2.3 million people, which is a quarter of everyone in the country.  Geographically, Austria is the size of South Carolina, but with mountains that one Austrian referred to as “nein, nein dat is only a big hill!” (I suspect he got “hill” and “mountain” confused in English.  Or maybe not).

Natives of this alpine republic are like the really cool kids in high school. Austrians are more relaxed and less punctual than their Teutonic neighbors.  The Germans would play the role of the nerds.

The weather when I land in Vienna is cold, dark and rainy.  This city is like Seattle, but instead of Pearl Jam scalpers, you have Mozart scalpers.

Austrians are very polite and won’t tell you how tired they are of hearing about the Sound of Music or being mistaken for a German. Secretly, I believe they must be thinking in my late father’s parlance “Go Fuck Yourself” used on business rivals and recalcitrant employees and shortened by his staff to GFY—a new business acronym in our family company.

Having said that, Austrian German is sing-songy compared to German German.  The Sound of Music might’ve been one of the subtlest cinematic metaphors ever made.  Sour, glum, monotone German might is countered by Austrians running away and singing in the woods about female deers (instead of grinding them into Hirschgulasch stew).

It has been argued that Austria has an inferiority complex regarding Germany. Germany is a much bigger country with a population tenfold in size.  But when Austria was an empire (my apologies to my middle school history teacher Ms. Koch, I completely slept through this) it was the other way around.  Germany is Austria’s #1 export market which generates some snarky Austrian comments.  But Germans think of Austria as the little sister to their big brother. 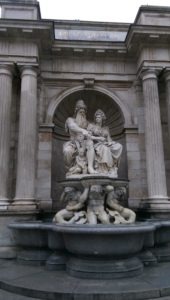 My taxi takes me from the Vienna airport to a downtown hotel in the 1st district.  We drive by a large statue of muscular, naked Greek God looking men that have fish heads for penises.  I suddenly realize what an artistic improvement the move to fig leaves was.  The yellow and green traffic lights blink as we drive
through them like a Darwinistic I.Q. test.  I see a lady in heels stumble walking down a cobblestone road.  She wobbles wildly like a ship in stormy seas. Looking sexy in the Middle Ages couldn’t have been easy.

As we arrive at the hotel, the sign above it clearly says “Motel”.  It has no relation to a motel, the word is used fashionably out of context like “That is the shit!”.  As has become reflex, the first thing I do upon entering my “Motel” room is to pull the mattress back and check for bed bugs (there are none).  I then unpack.  This brings me to one point that, as a world traveler, I am always puzzled by; the Austrian phobia of closets more than one inch deep.  I don’t know if this is some culturally intuitive quirk to assure the next occupying force that no one is hiding in them.  But it makes it a real pain to hang up more than a few shirts during a 10 day business trip.