To be fair, part of what keeps Austria unique is its’ intractability in the face of international pressure for change.  80% of all Austrian land is devoted to industries that supply raw materials like forestry and agriculture.  (source USDA 2015 Agric. Econ & Policy Report).  This inertia in responding to global competition is also the bulwark that preserves Austria’s way of life.  And it is difficult for a democratic government representing all domestic producers to focus instead on the minority that could be internationally competitive.  But being able to meet domestic and global demand need not be mutually exclusive goals. With the current system though, not many Austrian businesses will be able or want to achieve both (in my opinion).

And after all, this traditional economic inertia helps enable the current high standard of living.  Yet the risk that it entails…. Austrian exports to Germany in 2015 were 3.5 billion euros. But in the same year the entire Austrian agricultural economy generated just under 7 billion euros (source USDA 2015 Agric. Econ & Policy Report).  To paraphrase an expression, if the German economy ever catches a cold, all of Austria will sneeze.

I fly into Paris Friday afternoon from Vienna. My hotel is the Best Western on Marais Grands Boulevard in the northern 11th district. It’s in a rougher part of town. 60 year-old prostitutes have roamed these streets since the Middle Ages.African wig stores abound, hotel rates are cheap, and the main train station Gare du Nord is only a few metro stops away. By the time I check into my hotel it is evening. Starving, I exit and run across the street while an ambulance with siren blaring leisurely drives by me. I grab a quick dinner at a restaurant called Le Central.

Being tired, I order a Salade Norvégienne and a pint of 1664 pale lager beer. The restaurant’s chef has drawn the following on the blackboard for the Plats du Jour (today’s specials):

It is a snail broke down like a cow would be in a butcher shop. Awesome! This chalkboard sketch will be gone in a few days (even in the bad part of town the daily specials do change).

The next morning I wake up a bit early and take the underground Metro and R.E.R. trains to Gare du Nord station. The crowd at the R.E.R. platform isn’t too bad yet. In another hour the trains will be packed like a scene from a black and white WW II movie. 4 years (2 S.I.A.L.s) ago France had a major strike, and all fuel deliveries into Paris were blocked. Protestors lit massive bonfires in front of fuel refineries. One person committed suicide on the R.E.R. train tracks leaving S.I.A.L., halting all service. So this morning’s small crowd is a pleasant change of pace. And I luck out and catch the express train! 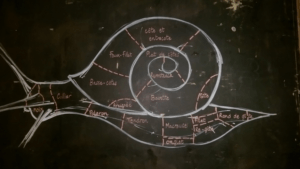 I arrive at S.I.A.L.’s Parc des Expositions station about an hour before visitors like myself are allowed in. But this is France. Security scans my visitors badge and tells me that only exhibitors are allowed in before 9:30 am. I explain that there has been a mistake. I’m actually with an exhibitor. They say ok and let me in. This is not so much a flaw in their security as an indication of how long bureaucratic mistakes can take to fix in France.

The S.I.A.L. exhibition has 8 massive halls, and is broken down by product type with sections for various countries sprinkled throughout. A lot of the men walking around have closely cropped facial hair. Women in business suits with skirts walk by me, their heels drumming the floor with metronomic timing.

The S.I.A.L. expo occurs once every 2 years and is one of the largest food shows in the world. This show has created a love-hate relationship among many European exhibitors. They love the number of buyers the S.I.A.L. attracts. They hate that the exhibition is in Paris. Barbara from the company Pastificio di Martino explains this in a very Italian way. She says Paris tries to act like an efficient and modern city. But in reality it is like Naples. Naples, though, is proud of its’ ornery, inefficient nature (Paris has more public transit strikes than any other country in the world source Kurt Vanandale European Trade Union Institute). But Paris keeps insisting that it is the Berlin of transportation, making it a businessman’s Potemkin village.